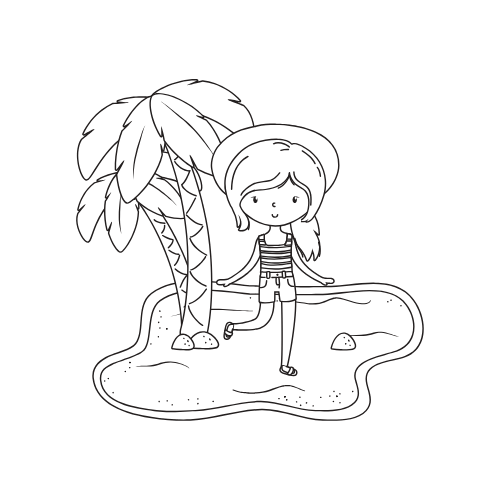 Dubai is located at 20 ° north latitude, so it has seasons.

Not exactly the way we may perceive spring, summer, autumn and winter. However, if you live in Dubai throughout the year, you can definitely see the pattern of weather changes.

Starting from August, we will characterize the weather in the UAE as “scary, unbelievably hot” to “pretty damn hot” in October and November, then to “surprisingly pleasant and cool” in December, January and February. Then we “warm up” from March to May, and from June to August we return to the place where we started 🙂

During this twelve-month cycle, you will experience sandstorms, rain and even snow in the UAE (yes, snow … more on this later).

LIFE IN THE CAVE

In hot months, at the end of May, June, August and early September, the temperature during the day can reach up to mid 40s ° C or even 50s ° C. People often ask me, “How do you stand it at all?” The simple answer is: I don’t really, because it’s not possible at all.

Like most other UAE residents at this time, I am becoming a resident of “my cave.” Actually many caves. They are all air-conditioned of course. My caves are my home, my car and any of the many shopping centers, restaurants and hotels.

Outdoor time is limited to an absolute minimum, such as a short walk from the car to a fully air-conditioned shopping center or apartment. And believe me when I say, that it’s more than enough.

Read More: HOW TO SURVIVE SUMMER HEAT IN DUBAI – 12 TIPS

HOT AND DRY? HOW LOVELY IT MUST BE…

Most major UAE cities stretch along the Arabian Gulf coast, and the summer sun brings very high humidity. In other words, the warmer the more humid.

In the summer months it is 45 °C outside or more. Being in the open air then could be compared to living in a sauna. And the evenings do not bring any relief from the humidity. Yes, temperatures drop to half 30 °C in the evening, which can be quite bearable, but the humidity becomes even higher then. The only exception to that rule is Al Ain, the second city in the Emirate of Abu Dhabi. It is far enough from the coast that the humidity is much lower. Maybe it’s time to move to Al Ain then?

ANYTHING MELTING ON THE ROADS?

When summer temperatures reach a certain point in many countries – certainly above 30 °C, most of us know the phenomenon of tar melting. The black, sticky bituminous material used to bind road materials begins to liquefy. However, this does not happen on UAE roads. It must have something to do with the mixture used or the benefit of modern research and materials, but even at 50 °C there is no trace of tar melting on the roads.

But something else happens at much lower temperatures – usually mid-20 °C, associated with winter and winter rainfall. Water seems to release a thin, oily layer on the road surface, which makes it very dangerous in combination with speed and suddenly applied brakes.

And that’s why those who have lived here for many years are very careful in driving a car when it rains. Far too many drivers, who are not accustomed to driving in wet conditions, continue to drive too fast and too close to other vehicles. Which often leads to many road accidents at this time.

NO GUTTERS AND RAIN SEAWAGE

So where does the water flow when it rains? According to the law of gravity, to the lowest point possible. The villa, where my friends live, has a flat roof but no gutter. Annual rainfall is expected to be so low that just having short, nearly horizontal pipes at strategic points on the roof of the building will allow the water to harmlessly flow to the ground, away from the side of the building, where it will eventually just seep into the sand. Everything is fine as long as the pipes are free from blockages. Therefore, if it happens that you move to a villa in Dubai, remember about this maintenance task, which is best done in November.

The same applies to roads. Storm drains, as they are, quickly fill up, and then at low points of the road (and quite deep) pools are formed. This causes, for example, cutting off 2 or 3 lanes on the highway. In Dubai, traffic is not very pleasant normally but rain makes it just a terrible experience. Rain causes chaos, many accidents etc. But about this I will tell you more another time. When it comes to fog (just like rain occurs in the winter) it can interfere with traffic on the roads as well as air traffic (January / February).

Read More: Covid-19 in the UAE. What happened

TIME FOR THAT WARM JACKET

The concept of cold is quite relative. For everyone it means something different. Russian have different understanding of cold so do Italians and so on.

So in Dubai, in December and January, you often see people late at night or early morning in warm jackets or coats and very often with hats on their heads. And what kind of conditions lead them to this? Well, the temperature in December and January can drop to 15 °C … or even to 12 °C. I admit that myself, even though I am well accustomed to freezing temperatures in winter, I bought a warm sweater myself. Laughing now? Well, let’s talk after few years spent here. We will see then:)

In winter, many tourists come to the UAE and this is really the best time to be here. But you also have to remember that it may rain during this time and sometimes a long-sleeved sweater or sweatshirt will be very advisable.

It’s not a surprise that we do have snow in UAE, but it’s just an artificial one at Ski Dubai. That is where you can enjoy the snow, meet the penguins and learn how to ski. Yes, even when it’s 50°C outside. But snow is not just an artificial product here, but a real atmospheric occurrence that the UAE already experienced more than once. Over the last few years, snowfall has been recorded primarily in the northern emirates. As global warming and climate change is visible also here. Last snowfall was recorded in January 2020 in Ras Al Khaimah. See photos here. In recent years, we’ve also witnessed hail.

SANDSTORM NO SO HOLLYWOOD STYLE

TV and Hollywood movies gave us a different idea of ​​a sandstorm than the one we experience in the UAE. In the Arab Emirates we have windy sandstorms – known in Arabic as shamal. They fly over the Arabian Peninsula from the northeast – from Iraq – and can occur in most seasons.

What happens then? Well, it’s very unpleasant experience. Fine, dusty sand gets into everything, including your homes. If you try to go out for a while, for ex. to the balcony, it is very likely that you will eat quite a bit of sand. You can drive in these conditions, but the visibility is significantly reduced. The wind is strong, but you won’t see caars thrown into the air…maybe only garbage shuts.

Despite these stories of frost and rain, I definitely say that the best time to travel to the UAE is from November to the end of April. As for the remaining months, well … you have been warned 🙂 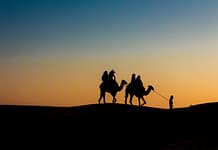 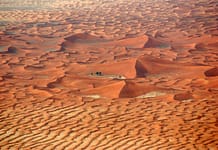